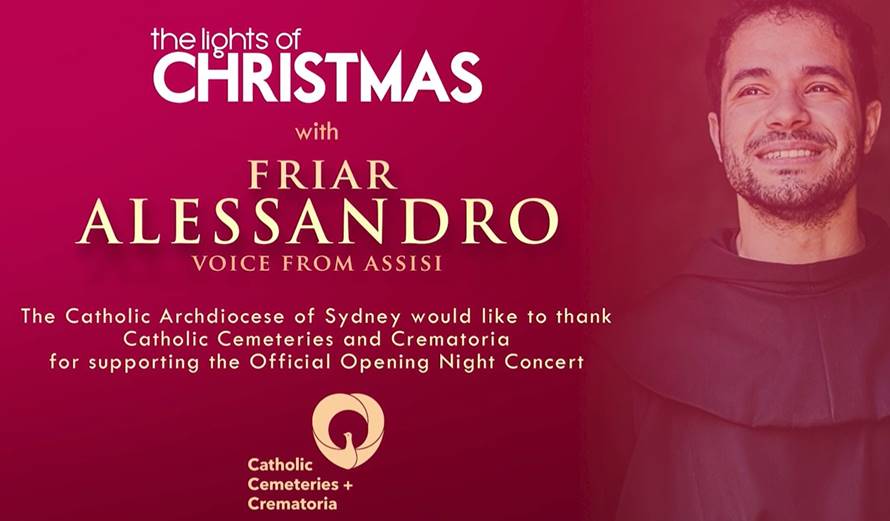 Catholic Cemeteries + Crematoria is delighted to sponsor the opening night concert of The Lights of Christmas, featuring acclaimed international tenor Friar Alessandro in his first concert in Australia.

Friar Alessandro will sing a collection of Christmas carols on the opening night of this year’s 10th anniversary of The Lights of Christmas at St Mary’s Cathedral, Sydney. The light show this year will not only highlight The Christmas Story, but will also feature many of the memorable animations from previous years, along with the popular Madonna and Child segment.

Friar Alessandro lives in the small town of Assisi, the birth and resting place of St Francis of Assisi, who founded the Franciscan order. He went on to become the first friar to land a deal with a major record label and is often called the Voice from Assisi. Friar Alessandro’s rich tenor voice has been heard in cathedrals and concert halls throughout Europe, the UK and the USA.

Friar Alessandro will undertake his longest flight ever when he comes to Sydney to sing at the opening night of this year’s The Lights of Christmas. He will be joined by Australian international concert pianist Vivian Choi, who will return from New York for the event and the Artes Christi choir and orchestra.

“I have heard about The Lights of Christmas and am very excited about singing for all of you,” he said.

NEED HELP WITH THE NEXT STEPS?

We can chat over the phone or meet you in person. We can help you create the complete funeral plan that suits you. We offer a full range of affordable burial and cremation choices including memorial packages.

When making funeral arrangements it's important to get it right. Starting with your last wishes and caring for the family, together we can help to keep it simple.

Catholic Cemeteries and Crematoria manages five cemeteries within the western Sydney area, providing world class funeral services, by burial or cremation. We are the independent experts helping families take care of the final stage of life.

As a not for profit Catholic organisation committed to caring for the community now and into the future, you can be sure your family's memorial will be looked after for generations to come. Our compassionate staff will do everything to make a difficult time a little easier, without the sales spiel.